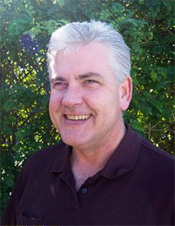 Dr. Nolan grew up in Orange, California.  After high school, he went on to become a firefighter with Los Angeles County.  He was involved in a work-related accident in which there was a combustion fire and he was thrown and received a compression fracture in his back.  Since his career as a firefighter ended abruptly, he pursued a career in computer repair. He traveled nationally working on large systems.  During one of these repairs, he injured his neck.  After seeing an orthopedic, he was placed on medicine that gave him no relief.  Finally out of desperation, a friend referred him to a chiropractor who helped him almost instantly.   He decided to go back to school to become a doctor of chiropractic. He graduated from Los Angeles Chiropractic College in 1994.  In 1998,  he married Valerie and now has two children. When Dr. Nolan is not working, he is playing golf, camping or pursuing his spiritual relationship with God and counseling many friends/patients.

Dr. Nolan graduated from Los Angeles Chiropractic College in 1994.  He worked with several doctors before opening his own practice in 1999.  His real education began after graduating from college.  Although he has gone through many classes, seminars and learned many techniques, he has perfected his own technique taking pieces of various techniques and is getting phenomenal results.   Dr. Nolan looks for what is going on with the body, whether it is structural, biochemical, or emotional.  He combines Nutritional Response Testing (NRT), Total Body Modification (TBM), Natural Healing and Functional Bio-Chemistry.  He is also a  practitioner of Neuro-Emotional Technique (NET).  He is a graduate of the Spinal Research Institute of San Diego and a trained golf injury doctor.    As a spiritual man, he believes the body was perfectly designed by God and because of environmental issues or trauma, the body needs to get back on track with the absence of drugs or unnecessary surgeries.